Attaché is a graphical notation collaboration between Suss Müsik and visual artist Bernard Madden. Instrumental “fields” serve as musical maps for how sound/vocal fragments are to be phased, looped or counterpointed.

Mr. Madden explores systems in nature as would a scientist, revealing hidden information and transforming meta-relationships into a new visual language. His creative process extrapolates these relationships into renderings of graphite, pigment and plaster, creating a body of work that rests comfortably between avant-garde experimentation and traditional formalism. 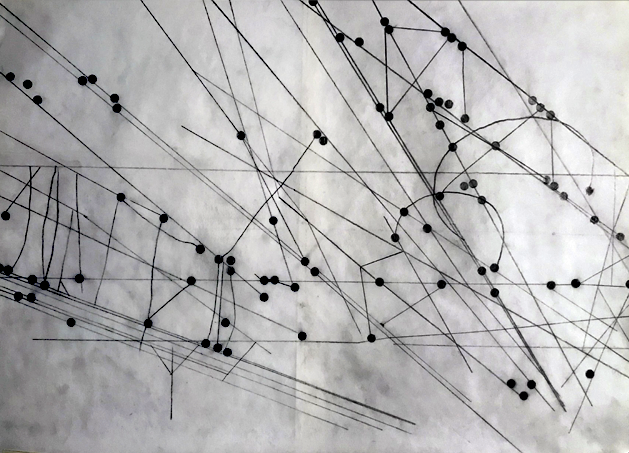 Suss Müsik translates Madden’s renderings using a computer algorithm to create fields of Moog-enhanced static, which serve as musical maps for how sound/vocal fragments are to be phased, looped or counterpointed. Select moments are then extracted and reassembled electro-acoustically as polyrhythms, using the original source material as a musical score.

The compositional process shares an affinity with the percussion music of Babatunde Olatunji, in that sound fields are combined and overlaid to create composite relationships. Moments are then extracted and assigned a “hit,” the same way a djembe performer might construct a complex polyrhythm from an array of simple parts. Ohter instrumentation or found audio phrases are built around these fragments.

Kel Smith is a composer, designer, author and technologist based in the United States. Much of his work centers on the use of digital platforms to help people living with disabilities and chronic illness. Mr. Smith is the author of Digital Outcasts: Moving Technology Forward Without Leaving People Behind, a book that explores the historical and cultural influence people with disabilities have on design innovation.

Mr. Smith has delivered over 100 presentations in seven countries, including talks at Google, SXSW and the Royal National Institute of the Blind. He has been interviewed on CBC Radio’s “The Current,” The Globe & Mail Canada, The Austin Chronicle and the BBC Ouch! Network.

Kel Smith is an author, designer and technologist who composes and records as Suss Müsik. Real instruments are used whenever possible, although most of the instrumentation is replicated electro-acoustically using haptic (gestural) controls. The project is headquartered in North America, with various collaborators located throughout the world. Suss Müsik began releasing material in the summer of 2015 and has since performed a number of commissions, including two pieces featured on the CHOQ Quebec radio program “La Rivière.”