According to art historian Lawrence Alloway, Agnes Martin was one of the principal pioneers of the “Hard-Edge” 1950’s painting movement. “Even where forms are not purely represented,” he wrote, “[Hard-Edge] abstract artists have tended toward a compilation of separable elements, treated as discrete entities. Forms are few and the surface immaculate … the whole picture becomes the unit. The result of this sparseness is that the spatial effect of figures on a field is avoided.”

Martin’s work evokes not only austere minimalism but also a cerebral airiness, perhaps gained from when Martin lived in New Mexico while attending university. Her work appears to vibrate off the canvas, the rigor of her craft subtly transformed into a sort of trembly dissonance. Even a simple line appears to breathe; a series of seemingly identical shapes reveal hidden nuances on close inspection. 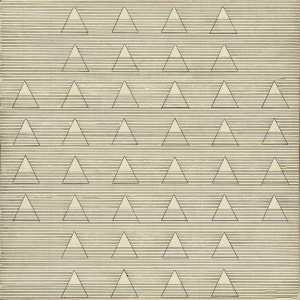 For this piece written for fake violins, Suss Müsik interpreted Martin’s lovely 1961 work entitled Words (ink and graphic on paper, mounted on canvas) as a graphical score. The parallel lines are represented by sustained, repetitious phrases playing a single note. The triangles are conveyed through a simple 3-note counterpoint performed in consecutive sets of four, four, six, six, six, six, four and four.

The piece is titled Words and was recorded live with one overdub for piano embellishment.