A Mersenne prime is a prime number that is one less than a power of two. It was developed in the 1600s by a French monk named Marin Mersenne. The Mersenne prime subsequence begins with the numbers 3, 7, 31, 127 and 2047, with 67108863 being the largest known Mersenne prime. Now you know.

Prime numbers have a special place in music history. Marin Mersenne himself was referred to as the “father of acoustics” for his seminal work on string vibrations. More recently, Three Dog Night sang Harry Nilsson’s famous lyric “one is the loneliest number that you’ll ever do,” exactly twenty years before De La Soul reminded us that three is the magic number.

Suss Müsik studied the two columns of numbers in search of hidden dynamics. It would have been a delicious coincidence if the total number of submissions (1371) had been a prime, but the total went over by ten (the same number who submitted the “magic number” three). 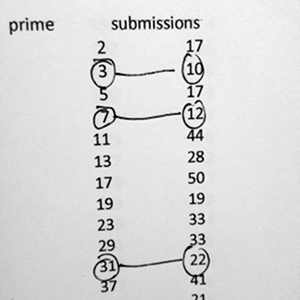 We determined a semantic derived from the Mersenne primes and programmed those figures into three drum machines at a tempo of 111 BPM. The modulations were coupled with a simple piano polyrhythm played in threes and sevens at counts of ten and twenty-two. It got a bit confusing after a while, so we packed it in at exactly 3:53.

The piece is titled Mersenne. The image shows three nuts from a hickory tree, of which there are 19 species.